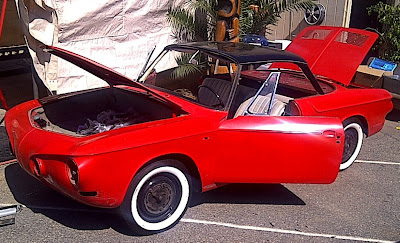 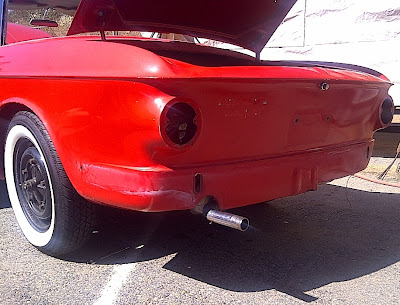 This past weekend I disassembled the 1963 Coupe so Jimmy Braxmeyer can finish the bodywork (last painted 1982, remove old rust bubbles & scratches) and repaint the lower-half L456 Ruby Red. Everything came apart fairly easily (4 hours). This body is in great original condition and should look very nice returned to new paint again. Jimmy needs three weeks for the work. Then comes the fun ... reassembly, which always takes 10X longer than the disassembly. We'll be using the new front & rear window seals, bumper bracket seals, and vent frame seals that were included with the T34 purchase. 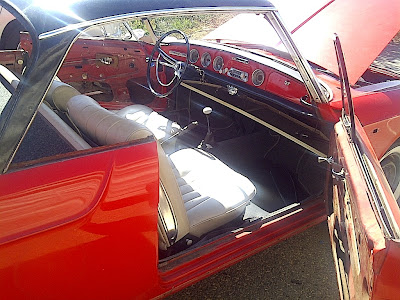 Getting a Deep Cleaning of the Rear 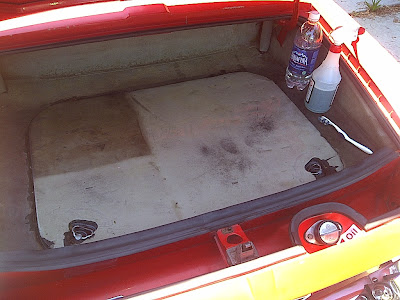 Over the weekend I decided to tackle cleaning the rear compartment that had not been cleaned in 49 years. It had a deep dark shade of oil residue over the trapdoor covering and the Ruby Red inner engine painted sheet metal was thick with residue as well. The lettering & arrows black ink had been rubbed-off over the years. I used a toothbrush, spray bottle of Simple Green degreaser, water bottle for rinsing, and a roll of paper towels. After some intense scrubbing the oily residue came off to reveal the original Silver-Beige material underneath (top pic). The side insulation panels came out beautifully as well. The inner walls of the engine sheet metal were easily cleaned. 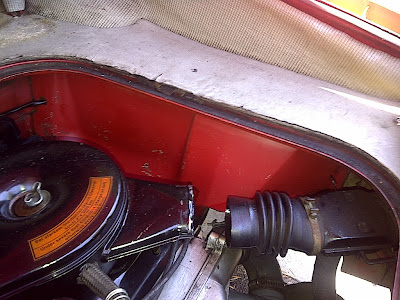 The lettering & arrows were easily repainted using Sharpie pens. A thin pen was used for outlining and the thick pen for filling-in the symbols. Took 15 minutes total for the repainting process. 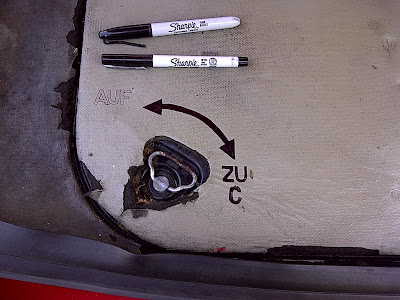 In the month I've had Jacin's Ruby Red & Black 1963 M343 I've completed a list of things that needed attention. When it was first delivered the speedo needle was sticking at 35mph and it had a chip out of the needle. The faces of all the gauges were foggy as well. So in the interest of cleaning up the gauges in preparation for the new owner's enjoyment I decided to get the full gauge set cleaned up. I've used Foreign Speedo in San Diego for the past 20 years and dropped-off the gauges. Bob said it'd be no problem to diagnose the speedo issues and give the gauges a good cleaning.

Two days later he called to say the gauges were finished! The speedo had been sticking because the internal magnetic parts were old and needed to be rebuilt. Fortunately he had the right parts (for a 49 year old T34 speedo?) and now it was calibrated and working like new again. He repainted the needle to match the others. And he polished the clear gauge faces to look crystal clear once again. All for $125. Killer service, great price, and super-fast delivery. I'm constantly impressed by this shop for their personalized attention to details and their honest approach to making their customers happy. Polishing the gauge faces was only $18 each too. 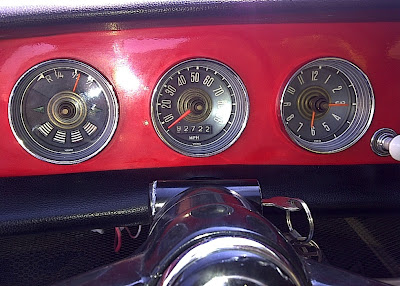 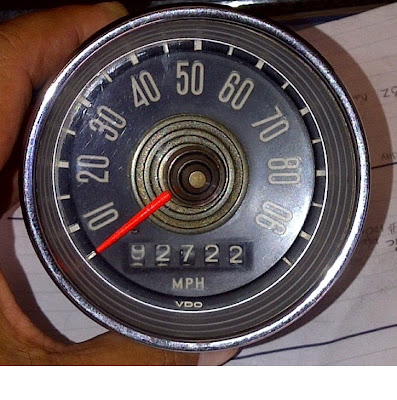 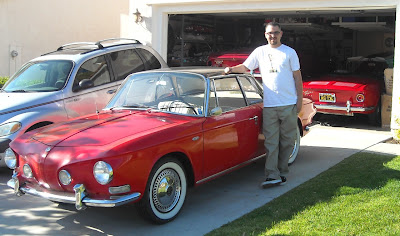 Jacin Ferreira dropped-off his Red & Black 1963 Coupe yesterday for consignment. It's an original 6V single-carb 1500cc with 150K miles and a fully-documented history. Reliable daily driver that I'll be taking up to the VW Classic this Sunday to find a new home. I'd bought this same T34 in 2005 from Yancy Everhardt in Arizona, cleaned it up and restored the interior, then sold it to Jacin a couple months later. Jacin has bought an extremely-early 1962 Notchback from England and the T34 doesn't have indoor storage space, so it's time for it to find a new home. Asking price is $12K, a fair deal for a nice daily driver push-button 1963 T34 Coupe.
Spent the past two days going through a prioritized list of issues to resolve. The fog lights were not working so I installed a new pair of 6V bulbs (thanks to Tuomas in Finland for the source!), cleaned the connections, and ZINGO they're working again! Fog lights on a T34 are such a beautiful feature ... and functional ones really add to the allure of the Sartorelli-designed front end. 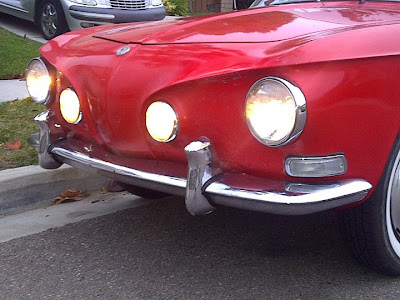 Rear overhead view shows the original California Black & Gold license plates and frames from it's 35 years in Northern California with its first owner. I replaced the rear scripts with NOS ones and used the script tubes that Franck Boutier found. Wide white wall tires are from Coker Tire, the Silvertown 2.25" model. 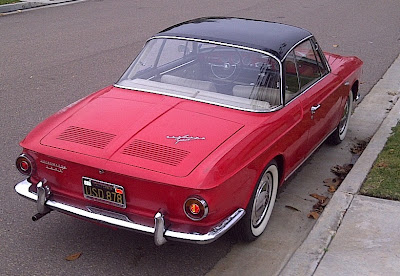 Engine is simple & authentic with 6V black coil, single-carb, early fuel pump, and it looks so nice this way! 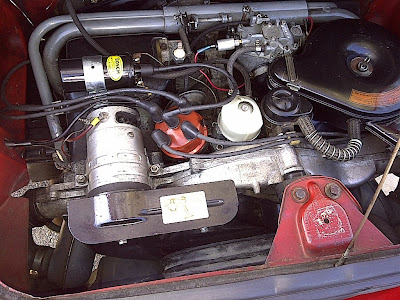 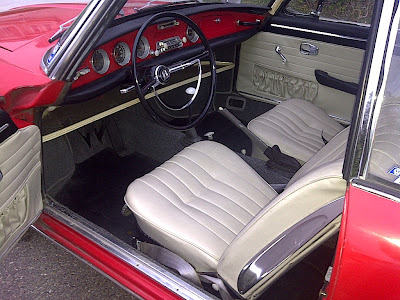 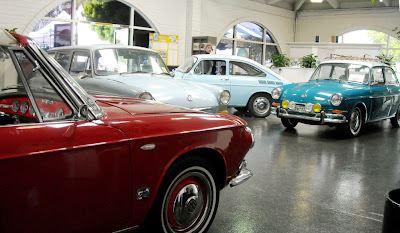 The Vintage VW Spring Festival is an annual event in Carlsbad, CA (near the beach) that I founded in 1992. It's at a VW dealership and we clear-off all the new VWs and make room for the old VWs. This Sunday there were 100 vintage VWs on the lot and four T3s in the showroom to celebrate the 50th Anniversary of the T3. Three T34s were there: Bob Walton's Pacific Blue & White 1964 Coupe, Rodger Marcks' Cherry Red & Black 1967 Coupe, and my Ruby Red 1962 Cabrio. Jack Fisher was there with his two girls as well but driving his 1962 Notchback since his 1965 T34 isn't quite roadworthy yet (but soon). 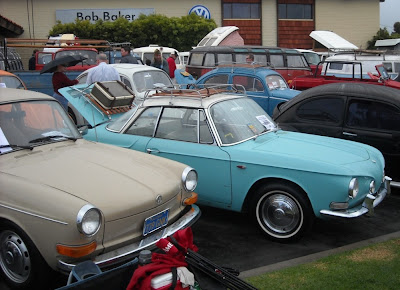 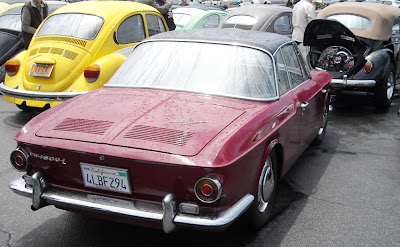 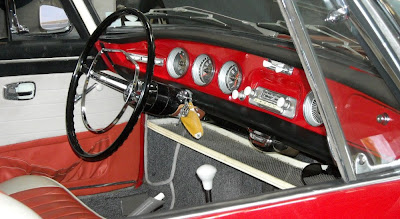 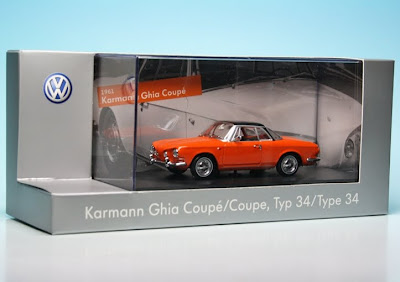 The orange Minichamps T34 has been out & available for a couple years now but two things were keeping me from splurging on a 2010 model: cost ($50) and it's ORANGE! T34s never came in orange so I really can't see why the model is orange, but it is. When I saw that this Minichamps model was repackaged in VW form (sold by VW now) and with a cool VW logo on the box, I fell for it.
Posted by Lee Hedges at Friday, April 22, 2011 No comments:

Once in a great while I'm genuinely surprised by the kindness of another and this Christmas Eve was one of those times. I received a knock at the door and my postman handed me a small box, heavy for its size from Texas. We'd already received all our presents for our five kids so this box was unexpected. I quickly unwrapped it and to my great surprise inside was a completely refurbished 1962-63 Bosch R6 distributor with NOS "big top" cap & rotor! Jason Weigel was my Santa Claus and I was very excited to receive this oh-so-generous gift that he knew my "Ruby" needed. Now her engine area can be more authentic & happy. Thank you, Jason ... & Merry Christmas everyone! I hope you've been good all year long and get exactly what you deserve under the tree tomorrow! 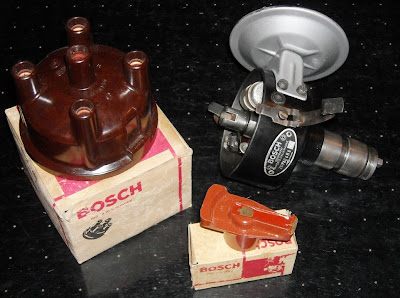 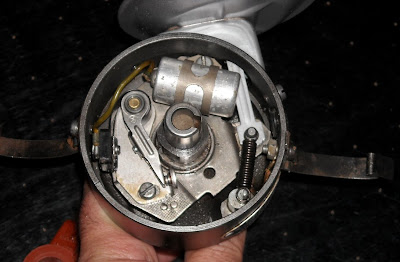 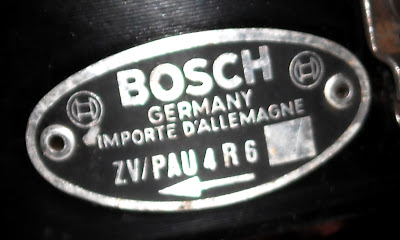